This essay isn’t about electronic evidence; so, if that’s what you came for, sorry.  I just had to spout off somewhere about China.

Most who know me know my lifelong passion for travel.  An astonished, “you’ve been everywhere,” often ends conversations that start, “where have you traveled?”  But, there are places I’ve missed around the globe, and until now, one of those was mainland China.  I’d been to Hong Kong; but, not all think that going to Hong Kong is the same as going to Big Red.

I expected China would be crowded, dirty and grim, like Roman Polanski’s Chinatown, but bigger.  I grew up with images of Communist China: Chairman Mao and missiles on parade: platoons of children marching in khaki with boxy green caps and red stars.  I imagined meals of chicken feet and fish eyes, lots of pagodas and poverty, and street’s teeming with bicycles.  Boy, did I miss the sampan on modern China!

I’ve been on the move in China for a couple of weeks, and am challenged to find suitable superlatives to describe this miracle of progress and prosperity.  I have t-shirts that are older than the thousands of soaring skyscrapers scaling the magnificent city skylines of Shanghai, Xi’an and Chongqing.  Shanghai alone has over 2,000 buildings above forty stories that were built since 2000.

And what fantastic buildings!

I visited a Grand Hyatt the other night that had its lobby on the 54th floor, with an interior atrium climbing to rooms on the 85th floor, crowned by a swanky restaurant and night club on floors 86 and 87. 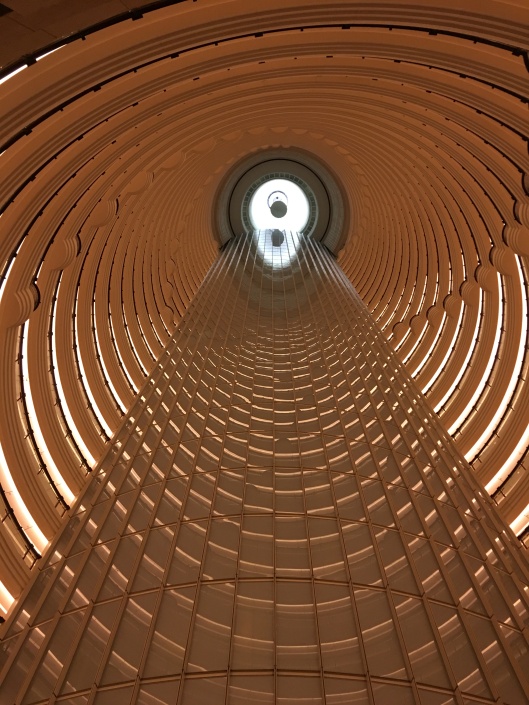 The architecture is from a child’s imagination.  Buildings twist like 108-story corkscrews and a 55-story J.W. Marriott will rotate forty-five degrees halfway up and have pincers on top—just because it can be done.  Spires, spheres, cantilevers and, yes, lots of pagodas leap out and up, this way and that. 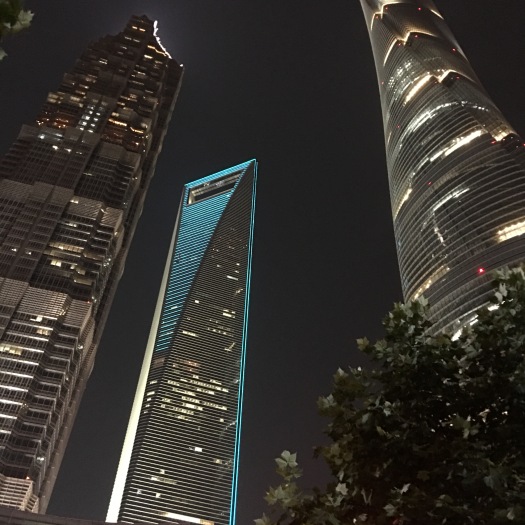 The exteriors are fantastically illuminated and the facades are alive with pictures and messages.  Bicycles were rarely seen; instead, your Average Zhou gets around, green and silently, on an electric scooter.  If you could re-imagine the joyless Los Angeles of Blade Runner as a happy place, you’d have the flavor of Shanghai, Xi’an, Chongqing or Beijing.  Visiting China is visiting the future.

When films show us the future, it’s typically antiseptic and Utopian like Minority Report—skinny people in spandex living in an Ikea—or it’s dystopian—gritty and oppressive, often blighted by technology.  Granted, Star Wars sported idyllic planets—usually right before they were blown up by the Empire—but, China reveals an exuberant, prosperous future that’s here and now (sans emperors).

Visiting the Three Gorges Dam gave me some sense of the national character.  Sure, it’s an engineering marvel (the world’s largest power station); but, it was China’s ability to relocate 1.3 million displaced persons (roughly the population of Dallas) and to protect and reconstruct many historic and cultural treasures that truly boggles the mind.  As a sometime resident of New Orleans, I am struck by the difference in our approaches.  In China, all of New Orleans would have been rebuilt brick-by-brick on the north shore of Lake Pontchartrain after Hurricane Katrina.  Whether that strikes you as a great or terrible idea, in China it simply would have happened.

Many Americans have fixed, unfavorable ideas about the “Commie” Chinese government and assume the Chinese people are “oppressed.”  Indeed, the hand of government is much in evidence everywhere in China, not so much by force as by the prominence of rules people tend to obey.  The Chinese do what they are told, a trait Americans mock because we equate independent thought with creativity and liberty.  I cherish the different drummer mindset in my country; but, I cannot help but admire what can be accomplished through conformity and purpose.

As to Communism, most of what I saw was capitalistic in the extreme; and as to oppression, the Chinese I encountered were pretty happy with their lot and prospects.  They were attuned to the rest of the world and candid and pragmatic about the restrictions imposed upon them by government.  They don’t deny their challenges; they embrace them for the common good.  Their government is sometimes inept or corrupt, and they know it.  Still, they see that their government is working for them.  Their progress from feudalism to Disneyland in a lifetime is proof of the payoff to the people.  The fruits of their collective industry have benefited most everyone, so, they see the point of it.

America is great.  It’s my home, and I am thoroughly grateful to be an American.  But, it is an unfortunate part of our American character to vilify and dismiss the accomplishments of other countries, particularly those with different political and religious foundations.  I’ve seen a lot of the world, and, I hate to say it, but we are coasting on laurels won by our parents and grandparents.

Americans are supremely fortunate to be less challenged by scale (China has a billion more mouths to feed with little arable land).  The United States enjoys an abundance of natural resources (energy, timber, iron ore, fresh water and fertile soil) and enormous wealth.  China is not “beating us;” despite our advantages; we are simply not trying as hard.  We are not using our human resources as well because we don’t sacrifice for the common good.

The hallmarks of American exceptionalism derive from the existential challenges that have forced us to pull together as a nation and a people.  Not much moves us to do that anymore; and, our government is so weakened by dissension that the ship of state is rudderless when it comes to moving us toward a common good.

“They” are not stealing our jobs.  Americans are saying “you’re fired” to Americans and hiring the Chinese because the Chinese work hard and skillfully at less cost.  We share in the profits from same when we buy Chinese-made goods at lower prices.  Do you think that Donald Trump chose to make his branded clothing in China because no one is the U.S. knows how to sew a tie?

The Chinese are buying many products from abroad—I’ve never seen so many outlets for luxury goods as I did in Shanghai; not in New York, Paris or London.  But, these are products where price doesn’t play, so-called “Veblen goods.”  “Made in USA” is a luxury label.

The Chinese have a philosophy that we might do well to consider.  Per Deng Xiaoping, “It doesn’t matter whether a cat is white or black, as long as it catches mice.”  Communism, Capitalism, Socialism, Taoism or Maoism–whatever catches the mouse.  We Americans care too little for getting things done.  We care too much about party, gender, orientation, religion and race.  We need not “beat” the Chinese; they are a billion smart, industrious people ahead of us.  Instead, we must strive with them, trade with them and ally with them.  Their values and ours are not so far apart.  They do not hate us, nor do they aspire to destroy our way of life.  After a lifetime of hearing otherwise, I had to come here to see that.  I encourage you to come see for yourself.

12 thoughts on “A Glimpse of China: Prosperity and Purpose”