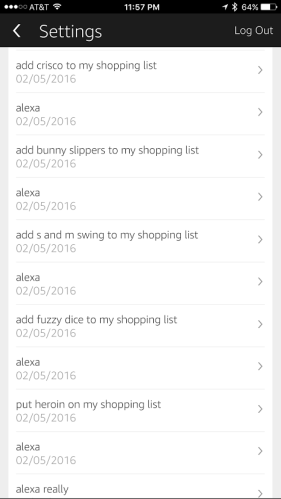 It’s said that the difference between men and boys is the price of their toys.  True enough. A benefit of adulthood is that, if you’re lucky, you can splurge on stuff you dreamed of as a child.  For me, a boyish passion was remote sensing and control.  When you’re small and powerless, you feel bigger and empowered to monitor and control things from afar, even if “afar” is just a few feet away. So, before I began fooling with phones and multi frequency switching systems as an adolescent, I was a grade schooler stringing, first real string, then wires and finally transmitters and receivers to turn things on and off and monitor my little world.

Most of these I built, some I bought (or, more accurately, I received as gifts from my indulgent parents).  I vividly remember the Sonuswitch from the venerable  Hammacher Schlemmer‎ store on East 57th Street in Manhattan, a boxy black and gold brick that turned on lights with two hand claps or by jingling keys.

The ’60s were a Golden Age for the electronics tinkerer.  Radio Shack then sold aisle-after-aisle of bright red Science Fair electronics kits and thousands of discrete components (what transistors, resistors, and capacitors are called to distinguish them from integrated circuits or “chips”).  In 1967, I’d venture down to Canal Street and cruise blocks of surplus electronic outlets selling “space age” government surplus componentry or drool over the wares at the long gone Lafayette Radio Electronics and Heathkit stores on West 45th Street.  Lafayette is where I got an FM transmitter that allowed me to broadcast to a vacant corner of the FM dial and the Big Ear, a giant orange parabolic microphone that promised the ability to listen to distant whispered conversations.

I’ve tread memory lane with a purpose: to talk about the latest manifestation of my childhood longings for remote monitoring and control and what they signal with respect to e-discovery.  Today, we are entering a Golden Age of remote sensing and control for the masses.  Internet-enabled cameras monitor my home, and lights and door locks answer to apps on my iPhone.  My lightbulbs talk to the network and adjust brightness and hue on command.  My thermostat let’s me tweak energy usage from aloft when I’ve forgotten to do it before heading to the airport.

And the most exciting development in my nerd’s paradise is the ability to control much of it by speaking to the new woman in my life, Alexa, the e-persona of my Amazon Echo and Dot devices.

I have my buddy Ernie the Attorney Svenson to thank for introducing me to Alexa.  In Ernie’s lovely Uptown New Orleans home, Alexa’s sleek, black cylinder holds a prominent place in the living room.  From the first moment Alexa and I spoke, I  knew I had to have her. And have her, I did.  I’ve had her in my bedroom, my bathroom, kitchen and living room, in my places in Austin and New Orleans.  Oh, Alexa, is there anything you won’t do for me?

Now, stop.  It’s not like that.  Alexa streams music, and news updates.  Checks the weather and traffic.  Orders pizzas and Ubers.  Keeps up with the grocery and to do lists.  Tells jokes.  Turns on the lights.  Adjusts the temperature.  Answers questions.  Does math. Wakes me up.  Reminds me of appointments.  She also orders stuff from Amazon (big surprise there).

The best part is that all of this is accomplished by speaking to Alexa–hands free–in a pretty natural way and from a fair distance, even when she’s playing music or chattering away.  “Hands free” is key.  Activating a mobile agent like Siri is inconvenient enough to keep me from, say, putting shaving cream on the shopping list while I’m shaving.  Plus, I can say, “Alexa, turn on the kitchen lights” without fumbling for a phone and opening an app.

Alexa plays nice with application development platforms like If This Then That (IFTTT); so, if Amazon hasn’t taught Alexa how to control something, someone else probably has, or I can do it myself.  In marked contrast to Yours Truly, Alexa is getting smarter and more capable all the time, because the hardware in my home is just a conduit to Alexa’s malleable brain in the Amazon cloud.

I’ve lately ordered more Alexa manifestations in the form of the new Amazon Echo Dot, a hockey puck-sized version that eschews high fidelity for ubiquity.  The Dot will go wherever I don’t need the big sound of the more expensive Echo or already have a sound system to which the Dot can connect by wire or Bluetooth.  The goal is that Alexa always be in earshot.

So, Alexa will always be listening.  To be fair, Alexa only transmits and records what she hears when I call her name.  But, as she becomes an omnipresent interface to everything, Alexa will know an awful lot about my activities and interests.  She records every interaction, including an audio recording of the person issuing instructions.  Trust me, those audio records are handy when you find, “Buy heroin and bunny slippers” on your shopping list after leaving friends alone in the kitchen with Alexa.

Using the Alexa app on my phone or computer, I can view a list of every interaction since Alexa first came into my life, and listen to each recording of the instruction, including background sounds.  You may call this “creepy.”  I call it “evidence.”

As a lawyer and forensic examiner, I’m tickled pink that these new technologies bring with them a plethora of precise, objective evidence.  Never in the course of human history have we had so much precise, probative and objective evidence about human thinking and behavior.  Viewed the right way, more digital evidence should inspire and empower lawyers, not frustrate and intimidate them.

My childhood gadgets were stone tools compared to the Internet of Things and wireless devices today.  But, the old stuff left hardly a trace.  By contrast, Amazon’s Alexa (and Apple’s Siri and Microsoft’s Cortana) are voluble, vigilant witnesses dutifully recording the mundane, profane and probative of our lives.

But, what they don’t do is make it easy to preserve and collect their digital archives when a legal duty arises.  Too many apps and social networking sites fail to offer a reasonable means by which to lock down or retrieve the extensive, detailed records they hold. True,  I can access each of thousands of interactions with Alexa and listen to the recording of the command.  One-by-one.  From the standpoint of spoliation, the Alexa app allows commands to be selectively deleted from a user’s history and the entire history to be purged; but, insofar as preserving the history when it’s potential evidence, Alexa is deaf and dumb.

It’s all  just data in a database in the Cloud; so, Amazon has a means to collect and produce it when the government comes calling in criminal matters.  Yet, for those tilling the fields of civil justice, it’s unlikely that a subpoena will prompt more than a form denial.  Diligent account holders have no self-directed mechanism to download a delimited (e.g., spreadsheet-compatible) copy of their data, the only option being an untenable screen-by-screen capture of data, coupled with recording the audio on some other device.  I wouldn’t wish that on anyone.  Even billing by the hour, it sucks.

Both the user communities and the legal community need to speak out on this.  Users need an effective, self-directed means to preserve and collect their own data when legal and regulatory duties require it.  Google has an excellent take-out mechanism.  Twitter does, too.  Facebook…well, Google and Twitter are good.  Most app and service providers offer nothing at all.

Listen, Amazon, Apple, Microsoft and all the other companies collecting vast volumes of our data through intelligent agents, apps and social networking sites, you must afford us a ready means to see and repatriate our data.  It’s not enough to let us grab snatches via an unwieldy item-by-item interface.  We have legal duties to meet, and if you wish to be partners in our digital lives, you must afford us reasonable means by which we can comply with the law when we anticipate litigation or respond to discovery.  You owe us that.  Alexa, are you listening?

[Dear Reader, if you’ve found better solutions for collecting from Alexa, I hope you’ll please share them here in Comments so all readers might benefit.  I can’t.  See, I called Alexa “Siri” by mistake, and now neither of them are talking to me.  Digital women: you can’t live with them, you can’t download their data.]