I am fortunate to teach electronic discovery and digital evidence in many venues. There’s the semester-long, 3 credit course at the University of Texas School of Law each Fall, the weeklong Training Academy offered to all comers each June at Georgetown Law School (as part of a splendid faculty) and the 50-70 speeches a year that keep me idling at airports. Next month, I’m adding a sixteen week, eight-session online evening program through the District of  Columbia Bar, immodestly titled “Prime Time with Craig Ball.”

All of these entail accompanying written material, so there is a lot of research and writing for the various courses and presentations.  Some of my students aren’t lawyers or are law students with the barest theoretical understanding of discovery.  I’ve found it’s never safe to assume that students know the mechanisms of last-century civil discovery, let alone those of modern e-discovery.  Accordingly, I penned the following short introduction to discovery in U.S. civil litigation and offer it here in case you need something like it, especially if you’re also teaching this stuff.  [It’s copyrighted, but feel free to use it with attribution].

Though I have never known a time without discovery, I found it interesting to reflect on the fact that civil discovery is only about 20 years older than I am; Discovery is nearly a Baby Boomer!  On a scale of jurisprudential evolution, we’re both young punks.  Need some perspective?  The FRCP are exactly the same age as U.S. Supreme Court Justice Stephen Breyer, former Attorney General Janet Reno and Prof. Alan Dershowitz.

Until the mid-20th century, the trial of a civil lawsuit was an exercise in ambush.  Parties to litigation knew little about an opponent’s claims or defenses until aired in open court.  A lawyer’s only means to know what witnesses would say was to somehow find them before trial and persuade them to talk about the case.  Witnesses weren’t obliged to speak with counsel, and even when they did so, what they volunteered outside of court might change markedly when under oath on the stand.  Too, at law, there was no right to see documentary evidence before trial.

John Henry Wigmore, nicely summed up the situation in his seminal, A Treatise on the System of Evidence in Trial at Common Law (1904).  Citing the Latin maxim, nemo tenetur armare adversarium suum contra se (“no one is bound to arm his adversary against himself”), Wigmore explained:

To require the disclosure to an adversary of the evidence that is to be produced would be repugnant to all sportsmanlike instincts. Rather permit you to preserve the secret of your tactics, to lock up your documents in the vault, to send your witness to board in some obscure village, and then, reserving your evidential resources until the final moment, to marshal them at the trial before your surprised and dismayed antagonist, and thus overwhelm him.  Such was the spirit of the common law; and such in part it still is. It did not defend or condone trickery and deception; but it did regard the concealment of one’s evidential resources and the preservation of the opponent’s defenseless ignorance as a fair and irreproachable accompaniment of the game of litigation.

Our forebears at common law[1] feared that disclosure of evidence would facilitate unscrupulous efforts to tamper with witnesses and promote the forging of false evidence.  The element of surprise was thought to promote integrity of process.

Legal reformers hated “trial by ambush” and, in the late-1930’s, they sought to eliminate surprise and chicanery in U.S. courts by letting litigants obtain information about an opponent’s case before trial in a process dubbed “discovery.”[2]  The reformer’s goal was to streamline the trial process and enable litigants to better assess the merits of the dispute and settle their differences without need of a trial.

After three years of drafting and debate, the first Federal Rules of Civil Procedure went into effect on September 16, 1938.  Though amended many times since, the tools of discovery contained in those nascent Rules endure to this day:

Depositions
A deposition is an interrogation of a party or witness (“deponent”) under oath, where both the questions and responses are recorded for later use in hearings or at trial.  Testimony may be elicited face-to-face (“oral deposition”) or by presenting a list of questions to be posed to the witness (“written deposition”).  Deposition testimony may be used in lieu of a witness’ testimony when a witness is not present or as a means to impeach the witness in a proceeding when a witness offers inconsistent testimony.  Deposition testimony is typically memorialized as a “transcript” made by an official court reporter, but may also be a video obtained by a videographer.

Requests for Physical and Mental Examination
When the physical or mental status of a party is in issue (such as when damages are sought for personal injury or disability), an opposing party may seek to compel the claimant to submit to examination by a physician or other qualified examiner.

Requests for Admission
These are used to require parties to concede, under oath, that particular facts and matters are true or that a document is genuine.

Subpoena
A subpoena is a directive in the nature of a court order requiring the recipient to take some action, typically to appear and give testimony or hand over or permit inspection of specified documents or tangible evidence.  Subpoenas are most commonly used to obtain evidence from persons and entities who are not parties to the lawsuit.

Strictly speaking, the Federal Rules of Civil Procedure do not characterize subpoenas as a discovery mechanism because their use is ancillary to depositions and proceedings.  Still, they are employed so frequently and powerfully in discovery as to warrant mention.

Rule 26(b)(1) of the Federal Rules of Civil Procedure defines the scope of discovery this way:

Parties may obtain discovery regarding any nonprivileged matter that is relevant to any party’s claim or defense and proportional to the needs of the case, considering the importance of the issues at stake in the action, the amount in controversy, the parties’ relative access to relevant information, the parties’ resources, the importance of the discovery in resolving the issues, and whether the burden or expense of the proposed discovery outweighs its likely benefit. Information within this scope of discovery need not be admissible in evidence to be discoverable.

The Federal Rules don’t define what is “relevant,” but the generally accepted definition is that matter is deemed relevant when it has any tendency to make a fact more or less probable.  Information may be relevant even when not admissible as competent evidence, such as hearsay or documents of questionable authenticity.

The requirement that the scope of discovery be proportional to the needs of the case was added to the Rules effective December 1, 2015, although it has long been feasible for a party to object to discovery efforts as being disproportionate and seek protection from the Court.

Protection from Abuse and Oppression

The discovery provisions of the Federal Rules of Civil Procedure are both sword and shield.  They contain tools by which litigants may resist abusive or oppressive discovery efforts.  Parties have the right to object to requests and refrain from production on the strength of those objections.  Parties may also seek Protective Orders from the court.  Rule 26(c) provides:

The court may, for good cause, issue an order to protect a party or person from annoyance, embarrassment, oppression, or undue burden or expense, including one or more of the following:

(A) forbidding the disclosure or discovery;

(B) specifying terms, including time and place or the allocation of expenses, for the disclosure or discovery;

(C) prescribing a discovery method other than the one selected by the party seeking discovery;

(E) designating the persons who may be present while the discovery is conducted;

(F) requiring that a deposition be sealed and opened only on court order;

(G) requiring that a trade secret or other confidential research, development, or commercial information not be revealed or be revealed only in a specified way; and

(H) requiring that the parties simultaneously file specified documents or information in sealed envelopes, to be opened as the court directs.

Character and Competence in Discovery

Discovery is much-maligned today as a too costly, too burdensome and too intrusive fishing expedition.[3]  Certainly, its use is tainted by frequent instances of abuse and obstruction; yet, the fault for this stems from the architects of discovery—principally lawyers—and not the mechanics. Discovery is effective and even affordable when deployed with character and competence.

But, what’s feasible is often at odds with what’s done.  There is a sufficient dearth of character and competence among segments of the bar as to insure that discovery abuse and obstruction are commonplace; so much so that many lawyers frequently rationalize fighting fire with fire in a race to the bottom. 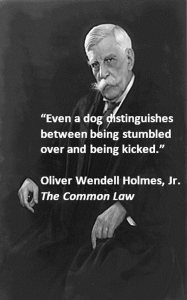 Character is hard to instill and harder still to measure; but, competence is not.  We can require that lawyers master the ends and means of discovery—particularly of electronic discovery, where so many lag—and we can objectively assess their ken.  When you can establish competence, you can more easily discern character or, as Oliver Wendell Holmes, Jr. aptly observed, you can know what any dog knows; that is, the difference between being stumbled over and being kicked.

To leap the competence chasm for e-discovery, lawyers must first recognize the value and necessity of acquiring a solid foundation in the technical and legal aspects of electronic evidence; bar associations, law schools and continuing education providers must supply the accessible and affordable educational opportunities and resources needed to help lawyers across.

[1] “Common law” refers to the law as declared by judges in judicial decisions (“precedent”) rather than rules established in statutes enacted by legislative bodies.

[2] That is not to say that discovery was unknown.  Many jurisdictions offered a mechanism for a Bill of Discovery, essentially a separate suit in equity geared to obtaining testimony or documents in support of one’s own position.  However, Bills of Discovery typically made no provision for obtaining information about an opponent’s claims, defenses or evidence—which is, of course, what one would most desire.  As well, some states experimented with procedural codes that allowed for discovery of documents and taking of testimony (e.g., David Dudley Field II’s model code).  For a comprehensive treatment of the topic, see, Ragland, George, Jr., Discovery Before Trial, 1932.

[3] Such concerns are not new.  Well before the original Rules went into effect, the Chairman of the Rules Advisory Committee exclaimed, “We are going to have an outburst against this discovery business unless we can hedge it about with some appearance of safety against fishing expeditions.” Proceedings of the Advisory Committee (Feb. 22, 1935), at CI-209-60-0-209.61.  Many still curse “this discovery business,” particularly those most likely to benefit from the return of trial by ambush and those who would more-or-less do away with trials altogether.

5 thoughts on “Introduction to Discovery in U.S. Civil Litigation”