I returned from frigid New York City last night, modestly triumphant that I hadn’t botched my interview with Watergate journalist and Fear author Bob Woodward.  Woodward turned out to be just the nicest guy and we got on swimmingly.  I shouldn’t be surprised as many of the highly successful people I’ve known have proved courteous and generous of spirit.  I guess nice guys finish first because we are happy to help them succeed.

In New York, heading to the Whitney to take in the excellent Andy Warhol retrospective, I happened on an architectural antiques store in the Meatpacking District called Olde Good Things.  I love such places and was delighted to find they were selling vintage Jacquard loom cards.  I collect (NERD ALERT!) examples of milestone computing technologies, especially antecedent digital storage devices like piano rolls, magnetic core memories and, now, Jacquard loom cards!  I use these for “show-and-tell” in my digital evidence classes.  In a touching twist, the cards I bought were salvaged from an abandoned lace factory in Scranton, Pennsylvania, the old coal town a/k/a Electric City where my father grew up and is laid to rest.  Here’s my acquisition:

This digression has a purpose.  Waiting for me on my return to New Orleans was a book I’d ordered called, “The Computer Book” by Simson Garfinkel and Rachel Grunspan.  It’s subtitled, “From the Abacus to Artificial Intelligence, 250 Milestones in the History of Computer Science;” but, don’t be put off by that mouthful; it’s a delightful read and a visual feast.  Each of the 250 well-curated, chronological milestones are flanked by gorgeous full-page photography.  Among them, Milestone 13, The Jacquard Loom: 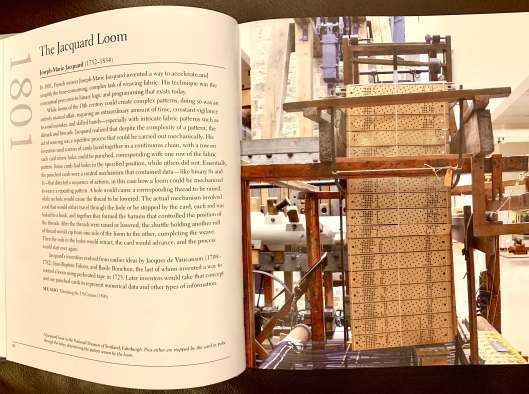 The punched cards used in the Jacquard loom circa 1801 were later adapted by inventor Herman Hollerith to tabulate the U.S. Census in 1890 and were forerunner to the punched IBM cards that were a common medium to enter and store digital data from the 1930s through 1970s.  Another descendent: the punched paper tape I used to store BASIC computer programs in high school circa 1972.  Our modern computing feats are often smaller, speedier reimaginings of age-old technologies.  The Computer Book ably underscores that evolution.

I bought the book because I’ve followed Simson Garfinkel’s extraordinary career since he was a graduate student buying second hand hard drives and scaring the snot out of people by revealing how much sensitive “deleted” data could be resurrected via forensic file carving.  That’s common knowledge now, but largely because pioneers like Simson made it so.  Simson is Professor Garfinkel today as well as the Senior Computer Scientist for Confidentiality and Disclosure Avoidance at the US Census Bureau.  Shades of Herman Hollerith! Simson holds seven patents and has published dozens of articles on computer security and digital forensics.

I’m considering making the book required reading for my law classes–something I’ve not done before as I prefer my students not go out-of-pocket.  The Computer Book succeeds in being accessible to the lay reader in a way few books about computing match. To really understand technologies, laws or people, it pays to delve into their origins.  If I ran the world, The Computer Book would be required reading for anyone in the e-discovery space.

6 thoughts on “The Computer Book: A Pleasant Stroll through the History of Computing”